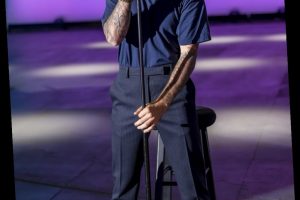 Justin Bieber made his country music awards show debut with a special song.

At the 2020 CMA Awards on Wednesday, the pop star, 26, and Dan + Shay performed their hit collaboration "10,000 Hours" together for the first time publicly since its release in October 2019.

Following COVID-19 protocols, Bieber, Dan Smyers, 33, and Shay Mooney, 28, stood apart as they delivered a stripped-down version of the song to an empty Hollywood Bowl in Los Angeles.

"10,000 Hours," which is the lead single from Smyers and Mooney's upcoming fourth studio album, was first performed live spur-of-the-moment at Bieber's South Carolina wedding to wife Hailey Baldwin on Sept. 30, 2019. (The artists share Scooter Braun as a manager.) Ahead of their CMA Awards performance, Dan + Shay opened up about gearing up to hit the stage with the pop star.

"I am a little bit nervous, in a good way," Mooney said during a recent chat with radio personality Kelly Ford, who asked if the two were feeling the nerves about performing with Biebs. "I'm more excited, I would say. We haven't really gotten to have that moment of celebration with '10,000 Hours,' we just had the year anniversary of the song. So, it's kind of crazy that we haven't gotten to. Obviously, with everything that's happened, we're excited to get back with him and to hang and be able to perform it. So, I'm a little nervous, but I'm also mostly just kind of excited."

Smyers spoke about welcoming musicians from other genres into the country music realm: "I feel like everybody outside of the country world wants to be a part of it and when they get an experience, they're like, 'This is so amazing.' It's so welcoming. It's just such a family. Everybody gets along and I think other genres kind of look in and they're like, 'We kind of want that.' I think that's why a lot of pop artists gravitate towards collaborating with country artists. I think it's uncharted territory for them and it's really cool. So, we're proud to raise that flag and to do this performance with Bieber. I know his fan base is excited and we are too." Of course, he was also excited about the dynamic duo's potential to snag some wins during the big night.

"Hopefully we can bring home a trophy or two," Smyers said. "I think it would be [Justin's] first country award. If we could be a part of that it would be cool to have one [with] our names on the shelf."

"10,000 Hours" was nominated for three awards at the CMAs: single, music video and musical event of the year. Dan + Shay is up for a total of four, including vocal duo of the year, which they won.

Of the three nominations they received for the track, the duo was asked which one they want to bring home most.

"We would definitely take any of them," Shay told the host. "If there was one of them, having the one with Biebs would be pretty cool. This would be his first country award I think, so having that moment and kind of always having that memory [would be cool.] We already have the song that we got to have a big hit with him, so that was just such an honor and [I'm] very thankful and [it] completely changed our careers. So, it would be awesome to kind of put a nice little bow at the end of that and win that one."

The lyrics, which were co-written by Bieber, feature the trio promising to love their significant others for "10,000 hours or the rest of my life." That message is further reemphasized in the song's accompanying music video, which costars their wives Hailey, Abby and Hannah. (The video marked the first time Bieber and Baldwin were in a project together.)

And Bieber was not the only pop star to make his CMA Awards debut this year. Charlie Puth joined Gabby Barrett for her hit single "I Hope," which was nominated for single of the year.

All three will be performing throughout the night: Lambert, 36, is set to belt "Settling Down"; Combs, 30, performed "Cold as You"; and Morris, 30, will sing her single of the year-winning hit "The Bones."

The 54th Annual CMA Awards are airing live from Nashville on Wednesday at 8 p.m. EST on ABC.

END_OF_DOCUMENT_TOKEN_TO_BE_REPLACED

END_OF_DOCUMENT_TOKEN_TO_BE_REPLACED
We and our partners use cookies on this site to improve our service, perform analytics, personalize advertising, measure advertising performance, and remember website preferences.Ok