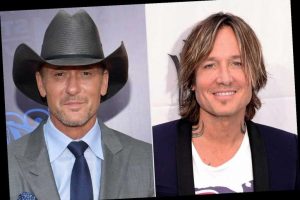 Keith Urban remembers the moment he forgot the guitar solo in his song with Tim McGraw and Taylor Swift, "Highway Don't Care."

Chatting with the country singer Wednesday on McGraw's Beyond the Influence Apple Music Country show, Urban relives the moment he nearly ruined the trio's performance at CMA Fest in 2013. (PEOPLE has an exclusive first look at the interview.)

"I will always appreciate the best guitar lead ride ever in 'Highway Don't Care,'" says McGraw. "You blew my mind and on that record. And so that will forever, and you almost killed me with it live on the ACM awards."

"Well, I almost killed myself with it when we played the CMA Fest and I was halfway through the solo and went, 'Oh, I probably should have practiced this before I got out here because I totally forgot it,'" Urban, 53, responds. "And I can see the trainwreck look on my face and me trying to look like I ain't nothing but a thing. But inside I was like, what the hell is going on here?" "And then suddenly all those years of playing clubs comes in handy. And I remember the great phrase, there is no wrong notes, just the look on your face," he adds.

Elsewhere in the podcast, Urban opens up about the moment he realized he wanted to play guitar. He says he never saw his father — who was once a drummer — play the drums, but he inherited the music rhythm from him.

"I think when I was about 4, they bought me this ukulele. And my dad said that I could strum it in time with the songs on the radio," he says. "I didn't know any chords, but he said I had that rhythm. So they asked somebody what's a good age for our son who seems to have rhythm to get taught some chords? And they said around 6 is a great age."

"And lo and behold, around about that age of 6, my mom and dad ran a little corner store and a lady named Sue McCarthy came by one day and asked if she could put an ad in the window offering guitar lessons," he continues. "And they said, 'If you teach our son for free, we'll put your ad in the window.' And so, I got taught how to negotiate and had to learn some chords all in the same breath."

Beyond the Influence Radio with Tim McGraw airs on Apple Music Country at 8 p.m. ET.