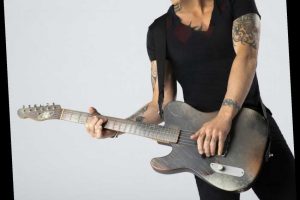 The Academy of Country Music Awards are going to look a little different this year — but as host Keith Urban knows, the show must go on.

After being postponed in March due to the coronavirus pandemic, the annual show (originally scheduled to take place April 5 in Las Vegas) will now air from three iconic locations in Nashville on Wednesday night with the country star, 52, serving as host for the first time.

"[I'm excited] that the show's going on!" Urban told PEOPLE (the TV Show!)'s Jeremy Parsons. "It was a challenge to figure out how we were going to do this with no audience and not in Las Vegas and not in April. But we'll be in Nashville, and I'll be live at the Grand Ole Opry. We'll also have artists at the Bluebird Cafe and Ryman Auditorium. It's going to be a fun night."

Check out PEOPLE's full ACM Awards coverage to get the latest news on one of country music's biggest nights. Each of the three locations, Urban said, are "equally magical" to play at "for different reasons."

"The Opry, it's sacred," he said. "The Ryman Auditorium is just so hallow — that stage, that venue is probably the best sounding venue I've ever played at in my life, and I've heard other artists say that, including Chris Martin from Coldplay. It's an amazing sounding venue. I saw Coldplay play at the Ryman Auditorium on one of their first tours in the states — it was extraordinary."

"I went to see this brand new band Coldplay, and it was only like 2,000 people," he continued. "The lead singer — no one knew it was Chris Martin — he kept laughing in between songs. I was like, 'This guy's really unusual.' At some point, he said, 'I'm sorry I keep laughing, but this is how we should sound.' It has always stayed with me. Having been on that stage, that's how you feel."

As he takes on the big night, Urban's family will be cheering him on from Sydney, where his wife, Nicole Kidman, has been shooting a film.

"They'll be ahead, in the future, cheering me on," he said.

Despite his star status, Urban said he's been "starstruck a lot" at Kidman's events.

"It's a bit surreal to meet certain people," he said. "I saw Crystal Gayle at an awards show, and I was like, 'Crystal Gayle! Wow!'" As for what he's planning to wear for his ACM Awards hosting gig, Urban joked he was thinking he "should wear a green screen suit."

"Then I'll just change it all night long," he said. "We can have [a poll] with the fans, and they can decide in the moment."

In addition to the ACM Awards, Urban is gearing up to release his new studio album, The Speed of Now Part 1, on Friday.

"My [upcoming] record has a lot of very personal and topical songs," he said. "The very first song is called 'Out the Cage,' and it says, 'I don't know just how long/But I've been trapped in here quite a while/I wonder if I'll make it out/I miss my friends/I miss the sky/I feel like I just live to die/That can't be what life's about.' So I think people will be pulled in right away."

This year's ACM Awards will air from Nashville on Sept. 16 from 8-11 p.m. on CBS. Join our correspondent Jeremy Parsons from 7-8 p.m. for PeopleTV Red Carpet Live: 55th Academy of Country Music Awards, featuring interviews with nominees and performers backstage from the famous Grand Ole Opry, as well as an interview with Urban.

END_OF_DOCUMENT_TOKEN_TO_BE_REPLACED

END_OF_DOCUMENT_TOKEN_TO_BE_REPLACED
We and our partners use cookies on this site to improve our service, perform analytics, personalize advertising, measure advertising performance, and remember website preferences.Ok