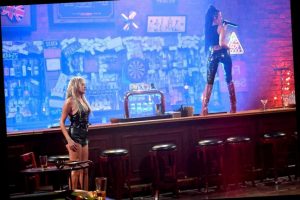 Kelsea Ballerini and Halsey know how to bring the house — or bar — down!

During the 2020 CMT Music Awards on Wednesday night, the singers performed their collaboration, "The Other Girl," both donning sultry leather outfits as they sang and danced with one another in an empty bar.

Kicking off the start of their performance that aired from Los Angeles, Ballerini, 27, strutted across the set in a cowgirl hat before she sat down at a bar, where she crooned the opening of the track. Midway through the performance, Halsey, 26, then joined her collaborator onstage for the Coyote Ugly-inspired number. Following the show, Ballerini reflected on her performance with Halsey in an Instagram post of the two singers posing together on top of the bar on the production's set.

The pair dropped their duet earlier this year as part of Ballerini's self-titled album and previously performed the song on CMT Crossroads in March.

Their CMT Crossroads performance of Halsey's 2019 track, "Graveyard," earned both artists a nomination for the CMT performance of the year award — thought the duo lost out to Chris Young during the night's festivities.

The country crooner was also up for two other awards, including female video of the year and video of the year. Though she went home empty-handed, the singer shared a sweet message for her fans on social media.

"one day will be our day. thank you for voting so relentlessly," she wrote on Twitter.

The 2020 CMT Awards were originally scheduled for earlier this year on June 3 but was delayed due to the ongoing coronavirus pandemic.

The fan-voted awards show event was hosted by Kane Brown, Ashley McBryde and Modern Family star Sarah Hyland and featured both live and pre-taped segments that were filmed in Nashville and across various other venues around Tennessee.

END_OF_DOCUMENT_TOKEN_TO_BE_REPLACED

END_OF_DOCUMENT_TOKEN_TO_BE_REPLACED
We and our partners use cookies on this site to improve our service, perform analytics, personalize advertising, measure advertising performance, and remember website preferences.Ok