Kentucky town is working to restore a goose-themed landmark inn 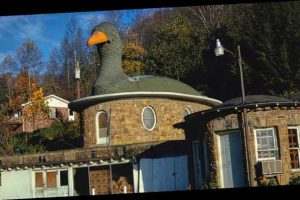 Residents from an Eastern Kentucky town are joining forces to restore their “Mother Goose.”

An iconic bed and breakfast known as The Mother Goose Inn and Gift Shop lost its goose-shaped roof after weathering harsh storms, according to a tweet issued by the official City of Hazard account.

“Today around 3:30, our beloved Mother Goose house collapsed. This was due to age and the stress added by the recent ice storms and flooding. She will be back,” the account wrote on Thursday, March 24. “We will definitely need your help. Updates will come as soon as we know.”

A GoFundMe to “Save the Mother Goose House” was set up and has since raised more than $8,250 from 202 donors. The campaign’s current crowdfunding goal is set at $10,000.

HOMES FOR SALE WITH LANDMARK VIEWS

Raised funds will reportedly go to reconstructing the goose roof’s head and neck, according to the GoFundMe.

The Mother Goose Inn is considered a local landmark at 2906 North Main Street. Visitors have long traveled to the unique structure to snap pictures of the green and yellow tiled goose roof. The inn itself is shaped like an oval egg.

Original construction on The Mother Goose Inn was completed in 1940, according to KentuckyTourism.com. It was designed by railroad worker George Stacy, who reportedly completed the project within five years.

KENTUCKY THEME PARK IS ALLOWING FAMILIES TO RENT OUT THE ENTIRE SPACE, GO ON UNLIMITED RIDES

The property was last renovated in late 2019 by inn operator Sherry Spradlin, according to FOX 56 Lexington, a local affiliate to Fox News.

The 81-year-old house has been featured in national television programs, including “The Oprah Winfrey Show” and HGTV’s “America’s Most Outrageous Homes.”

Local business owner Joey McKenney has stepped up to help The Mother Goose Inn raise money with a “Save The Goose!” t-shirt that is being sold at the Appalachian Apparel Co. for $20.

McKenney says $6 to $8 from every shirt sale will go to the inn, according to WYMT, a CBS-affiliated local news station.