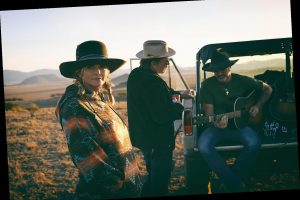 Miranda Lambert is taking fans to one of her favorite places.

The country star, 37, teamed up with Jack Ingram and Jon Randall to record 15 songs for the trio's new album, The Marfa Tapes, which will be released on May 7.

The tracks were written and recorded over a five-day period last fall in Marfa, Texas, the desolate town Lambert, Ingram and Randall call a "songwriting haven," where they laid down stripped-down verses outdoors with just a pair of microphones and an acoustic guitar as background noises of a crackling fire and sounds of the desert can be heard.

On Friday, they released the first single "In His Arms," along with the accompanying music video, which features the songwriters performing in Marfa with a stunning backdrop of the desert sunset.

The Marfa Tapes also features 2018's ACM song of the year winner "Tin Man," which Lambert released in 2017 on her sixth studio album The Weight of These Wings, and "Tequila Does," which she released in 2019 on her album Wildcard. (Both songs were written by the trio.)

"I'll never forget pulling into Marfa that first night at 4 a.m. The stars were like nothing I'd ever seen before, just this endless blanket hanging so low you could reach up and touch them. I immediately understood why this place was so special," Lambert said in a statement.

"There's no TV, no radio, nothing to do out there but pour a cocktail, sit around the campfire, and talk," Randall, 52, shared. "Eventually, that just inevitably leads to songs. There's no pressure to write, but most of the time, the three of us can't seem to help ourselves."

Ingram, 50, added, "There's something singular that happens in that moment of collaboration and creation, something you can never really recreate in the studio. Our hope with this album was to share a little bit of that magic with people."

Dallas native Randall began his music career as the guitarist for Emmylou Harris' Nash Ramblers and went on to release four solo albums as well as writing and producing for country artists such as Reba McEntire, Blake Shelton, Maren Morris and Brad Paisley. "We've been writing songs out there for six years. And this last time we went in September to write. I was like, we're going through all the songs. We were kind of going through all the years of our work tapes on our phones. And I'm like, 'What's going to happen to these songs. Let's just put them out raw.' And, and so we did, we are, which is scary, but I'm excited about it," the two-time Grammy winner said.

"We recorded a lot of it around the fire. A lot of it, we sat on the back of a tailgate on a Bronco and recorded up watching the sunset on a hill. We were doing 'Tequila Does,' and the border patrol flew over. So it was, you could hear that in that. It was just, we just kind of kept everything really raw," Lambert continued.

The star also shared news of the project on social media. "Every time I need an escape, I go to Marfa, TX. @JackIngram, and @jonrandallmusic come. We recharge. We get inspired by its beauty. We write songs. Tin Man was the 1st one we shared with you. Tequila Does was the 2nd. In between, we've written 13 more. And it's about time to start sharing them with y'all," she wrote.

Lambert, who recently collaborated with Elle King on "Drunk (And I Don't Wanna Go Home)," is also a member of the country music group Pistol Annies.