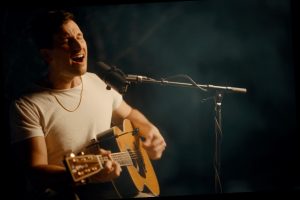 Russell Dickerson is bringing a special concert to his fans and viewers at home.

PEOPLE has an exclusive first look at Dickerson's appearance on CMT Campfire Sessions, which premieres on Thursday at 5 p.m. EST on CMT's official Facebook page and YouTube channel. Dickerson, 33, is the latest singer to take part in the network's concert series which features country stars giving acoustic performances as they share heartwarming memories by the fireside.

Dickerson kicked off his five-song setlist with his first single "Yours," which was also his first No. 1 hit in 2017. He then went into his new single "Home Sweet," which is off his second album Southern Symphony that was released in December 2020. And after performing his hit "Every Little Thing," the dad of one shared an amusing anecdote about his February 2020 single "Love You Like I Used To."

"Fun story about this one. I played it for my wife the first time and she was like, 'Uh, the title of the song is better than the song you just played me.' So you know, it stung a little bit. I'm going to be honest. But she was right, we all knew she was right. And, uh, listen to your wives out there. Know what I'm saying?" he said with a wink to the camera.

"So we went back, completely rewrote the entire song and when we came back, it was kinda that aha moment for this song," Dickerson shared. The musician and Kailey, 31, met in 2008 when both were music students at Nashville's Belmont University and married in May 2013. In September 2020, they welcomed their first child, a son named Remington Edward.

To conclude his campfire concert, Dickerson performed another No. 1 single, "Blue Tacoma." CMT Campfire Sessions is a new acoustic concert series showcasing the more intimate, nostalgic side of country music, with an emphasis on the songs and the storytelling that has always been at the heart of the genre. Upcoming episodes include Cody Johnson, Lee Brice + Hailey Whitters.