To get a general idea of how the people of Buenos Aires drink, you need only go inside any grocery or convenience store. It won’t be too many steps before you’re confronted with an end-of-aisle liquor display. But it won’t be vodka or rum on sale. It will be Campari, Fernet Branca, Cynar, Cinzano vermouth or Gancia, an aperitivo. Each is an Italian product, but porteños (as residents here are called), many of whom are of Italian or Spanish descent, have made them their own.

Cynar Juleps are more common than Mint Juleps, perhaps partly because bourbon is hard to come by here. Negronis and Negroni variations are everywhere; Argentina is the world’s third largest market for Campari. And Fernet and Coke might as well be the national drink. It’s not for nothing that Argentina has its own Campari and Fernet Branca distilleries. Thirsts must be met.

These longstanding drinking traditions have been interwoven into Buenos Aires’ robust cocktail scene, which encompasses more than 50 bars. They include every recognizable variety of drinking den, from hidden joints like the Harrison Speakeasy, to restaurant bars such as Casa Cavia; from historical standard bearers like Los Galgos, to the theme-park extravaganza Uptown, whose entrance exactly resembles a New York subway station — tile walls, turnstiles, sliding train doors and all. While they all keep an eye trained on global cocktail trends, each saloon has a distinctly Argentine edge.

“There are small and personal bars, and there are large and popular bars,” explains Rodolfo Reich, a local journalist and cocktail authority. “The lack of some imported drinks is supplanted with artisanal recipes from each bartender.”

And none of the watering holes are too far from a purveyor of Buenos Aires-style pizza, which is heavy on the cheese, may come on a flatbread made with chickpea flour, and could possibly be the best drunk food in the world. (Güerrin and El Cuartito are two recommended pizzerias.)

Also, the Argentine peso has fallen by nearly 50 percent against the U.S. dollar this year, making Buenos Aires an even more affordable destination for travelers. The country’s currency crisis is extremely tough on Argentina’s citizens, but helped boost tourism arrivals in September by 12 percent, according to government statistics.

If you want to take in the full gamut of porteño cocktailing, here is a suggested six-stop itinerary that covers most of the culinary and cultural bases. 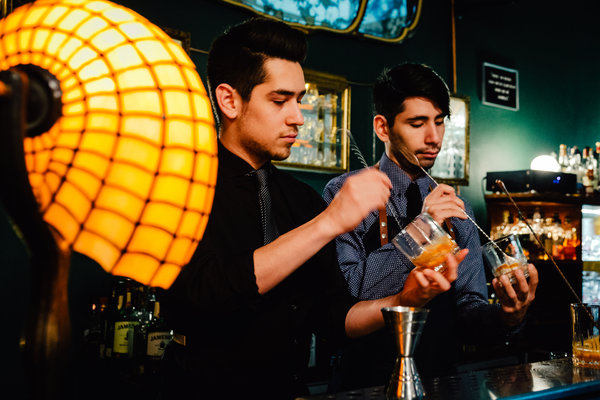 Doppelgänger is a darkened cove painted in deep shades of green and red. It may be the best place in town to order classic cocktails. The menu is littered with them. Of course, “classic” can mean something different here. Take the Old-Fashioned, the bar’s biggest seller. As with pizza, locals make this international staple their own way. A mixture of sugar and plenty of Angostura bitters is muddled at the bottom of the glass, then swirled about until it coats the entire inside. At Doppelgänger, an orange slice is then lightly muddled at the bottom. This is covered with ice, and then bourbon. The result is basically an Old-Fashioned crusta, an old genre of cocktail that involves a sugar rim. The first sip is strong. You’ll want the spoon they serve it with to stir the drink and integrate that sugar coating into the spirit. The Gibson is a good bet here, too, as it is the favorite of the owner, Guillermo Blumenkamp. They serve a dry version, with little vermouth and three onions. It is said that, if someone orders one, Mr. Blumenkamp will take one, too.

Federico Cuco is the owner of this whimsical and warmhearted bar, which is named after the author Jules Verne. He is a veteran bartender and an amateur cocktail historian. Mr. Cuco can serve you one of his house originals, such as the smoky Opium Old-Fashioned, or he can tell you about Buenos Aires’ rich mixological history, which includes mid-20th-century bartender celebrities like Santiago Policastro. Known as “Pichin,” Policastro cut a big enough figure to appear on television and publish a book, “Tragos Magicos” (or “Magical Drinks”). Mr. Cuco was behind a campaign a decade ago to “Save the Clarito,” the Clarito being a forgotten dry Martini riff by Pichin. It worked. You can order a Clarito anywhere in the city now. (The chief difference between the original Clarito and a Martini was a sugar rim. That touch, gratefully, has since been dropped.)

If you ask for other historical Buenos Aires cocktails, there’s a good chance Mr. Cuco will know how to make them. He is also a big advocate of local heritage brands like Amargo Obrero, a mild regional amaro, and Hesperidina, an orange liqueur that, in 1876, became Argentina’s first patented product. Oddly enough, Hesperidina was created by Melville Sewell Bagley, an immigrant from Maine.

Florería Atlántico is Buenos Aires’ most famous cocktail bar, a reputation it may have secured solely through the energies of its owner, Tato Giovannoni, a charismatic man who knows how to fill up a room. He also knows how to paint up a room; the pictures of sea monsters on the walls are his. Mr. Giovannoni describes his bar as being a tribute to the multiethnic history of the city’s population. Fittingly, the menu is divided by national influence, with sections dedicated to Spain (sherry drinks), Poland (vodka) and England (gin, Scotch). The bar’s signature drink is, naturally, a Negroni variation, but the dizzyingly complex Balestrini Negroni tells a distinctly Argentinian story. The Campari is locally distilled. The gin, Principe de los Apóstoles, is the creation of Mr. Giovannoni, boasting botanicals such as yerbe mate and eucalyptus. Averna amaro replaces the usual vermouth. And a dash of seawater from the actual Atlantic Ocean provides a saline accent. (The bar is called Atlantico, after all.) This is all infused with eucalyptus smoke and garnished with pine nuts. The eucalyptus branches could conceivably have been fetched from the flower shop upstairs, which serves as a false front for the bar.

That money has found its way into the Buenos Aires bar scene is evident upon entering the chic Presidente, which opened last year. The Presidente is extravagantly appointed, with chandeliers, high ceilings, a library-like private bar in the back and staff members who look like models. On the wall is a painting of 19th-century American bartender Harry Johnson who, I was told, is the bar’s spiritual guide. An LED counter above the bar tracks the number of Negronis sold; the night I was there, it was up to 10,912. It’s a trick borrowed from Dry Martini, a Barcelona bar that counts — well, you know. If you don’t want to follow the herd, the Milano Torino, a gin-less predecessor of the Negroni, is just as good. And the Buenos Aires Zombie makes an impression, arriving in a tall, white, custom tiki mug meant to resemble the Obelisco de Buenos Aires, an inescapable city landmark.

Buenos Aires’ longstanding aperitivo tradition extends to vermouth. Cinzano, the Italian vermouth company, has been a big presence here since the late 1800s; Argentina is, in fact, the top consumer of Cinzano in the world. La Fuerza — which was opened in January by Julián Díaz, a prominent local bar owner, the writer Martín Auzmendi and two partners, and occupies a bright, cheery corner storefront — offers a traditional, yet fresh approach to the apertivo ritual. It is a vermouth bar, or vermutería, a sort of bar that was once common in Argentina, but is now scarce. La Fuerze sets itself apart in that makes its own vermouth, using wines made in Mendoza and flavored with botanicals handpicked in the Andes. The owners tout it as the first vermouth to ever be produced in the Andes region. There’s a rojo and a bianco and both are on tap. Try them by themselves over ice with a twist; or, as porteños sometimes do, pair the rojo with fernet, and the bianco with Campari. The concise food menu has everything you’d ever want to nibble on while sipping a vermouth, including various olives, cheese, papas fritas, local salame del Tandil, lupin beans and pallares, which are like lima beans.

American whiskey presents a particular challenge to the city’s drink makers. Few bourbons are exported here; Wild Turkey was recently added to a short list that includes Jim Beam, Maker’s Mark and Evan Williams. And there is no rye at all. Flying in the face of these privations is Bourbon Brunch & Beer, an American-style honky-tonk that opened in September. Yankee touches includes a picture of Johnny Cash on the wall and a food menu that features hot dogs, mac ‘n’ cheese and bagels. Its casual-bar cred is further proven through its attitude toward that fernet and Coke habit, a drink that is shunned by some mixologists as too common, but heartily embraced here. (The Fernet Branca made in Argentina, by the way, is considerably drier and more astringent than the Italian version, which is what the U.S. gets. So the pairing with the sweet Coca-Cola makes more sense.)

Bourbon Brunch & Beer was created by the same folks who own the over-the-top Uptown. The owner told me he wanted to open a more relaxed bar, a place to hang out. The back bar is lined with dozens of bourbon brands that the owner smuggled back from trips to the United States, and intends to sell by the glass. When asked how that was possible, legally, he shrugged. “It’s Buenos Aires,” he said.