The coolest winter ice castles and sculptures in America 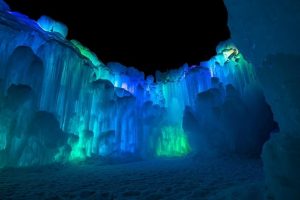 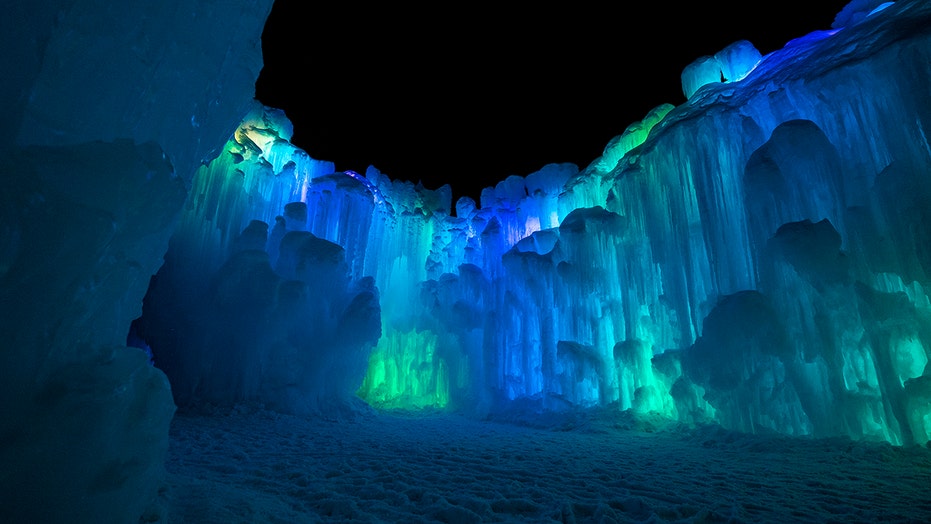 What’s the only thing cooler than a castle? An ice castle. Figuratively and literally, these ice castles and other impressive winter displays are among the best of the bunch. Read on for some of the most breathtaking ice castles and sculptures in the country. FYI: Unless specified or noted as a free attraction, check the website listed for entrance fees, which vary depending on age and day. 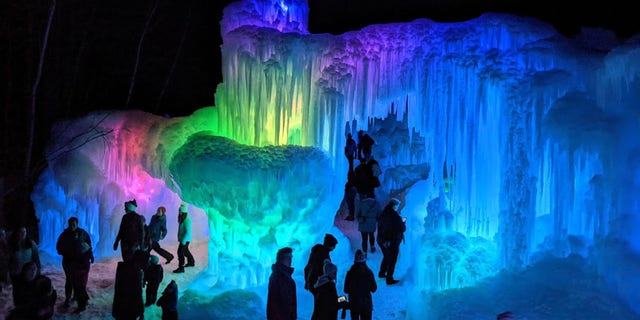 In the majestic White Mountains, journeyers will be treated to a fairy-tale display of ice castles from mid-January until mid-February depending on the weather conditions. All of the castles are hand-constructed and hand-placed by ice artists using hundreds of thousands of icicles, and you’ll also see tunnels, ice caves and ice slides. Illuminated by LED lights, visitors can also opt for a horse-drawn sleigh ride or the “Enchanted Forest Walk.” 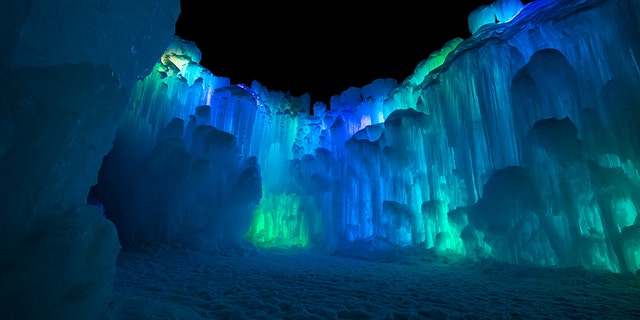 Prepare to be amazed in the Empire State. In Lake George, you’ll be treated to ice displays with LED lights and colors at the Festival Commons at Charles Wood Park. This new winter event is expected to be open from January to early March, weather permitting. Each hand-built castle is said to take thousands of hours to create, and each castle is approximately a whopping one acre in size. 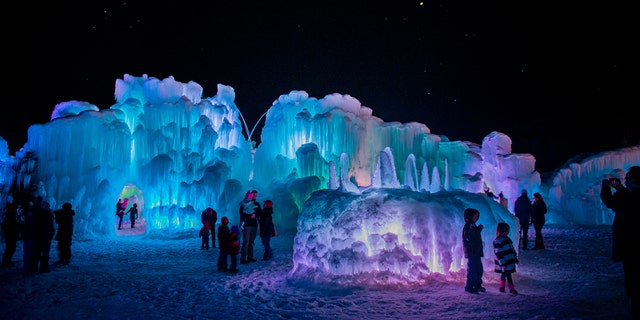 It’s to Utah we go for yet another Ice Castles experience. This one, situated in the scenic foothills of the Wasatch Mountains at the Soldier Hollow Nordic Center — a one-time Winter Olympics venue — is Ice Castles’ original outpost. Guests will be amazed by ice-carved slides, fountains, caverns and narrow slot canyons, crafted completely in ice and inspired by the natural slot canyons for which the Southwest is known. For a special outing, hop aboard a horse-drawn sleigh ride through the Wasatch Valley for ice-ing on the cake. Ice Castles in Midway, Utah, typically opens in late December or early January and remains open through late February. 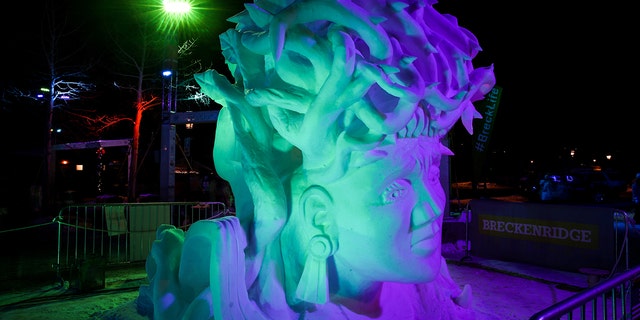 Not familiar with Breckenridge’s International Snow Sculpture Championships? Once you start scoping out videos from the mesmerizing event, good luck leaving the YouTube vortex. The celebrated snow-sculpting competition brings together 12 teams from around the globe to hand-carve 20-ton blocks of snow into larger-than-life art. Making these pieces even more impressive is the fact that competitors can only use hand tools. The carving week takes place Jan. 24-28, 2022, and viewing week for this unique outdoor art gallery is Jan. 28-Feb. 2, 2022. 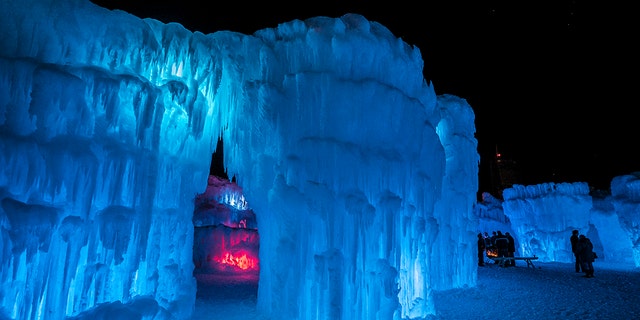 Head to Long Lake Regional Park in the Twin Cities suburb of New Brighton, and you’ll be greeted with quite the frozen sight to behold. As you marvel at the castle, take note of the various caverns, tunnels, crawl spaces, slides and fountains, all handcrafted from individually placed icicles. To up the ante, there’s also a sculpture garden with fairy-tale-themed ice sculptures linked by a light grove along a wooded trail to the castle. Ice Castles in Minnesota historically opens in early January and stays in place through early March, weather permitting. 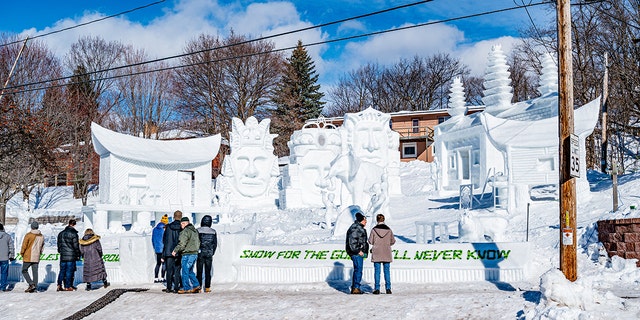 From Feb. 9 to Feb. 12, 2022, Michigan’s Upper Peninsula will host this free-to-visit carnival that’s sure to dazzle folks of all ages. Every year, the carnival has a different theme, and students put on quite the spectacle through highly detailed snow and ice sculptures.  Some of the largest sculptures take a month to create, and smaller statues are built overnight. There are also broomball games, comedy skits and the carnival’s queen coronation to enjoy.

A crazy-cool citadel awaits at Geneva National Resort and Club in this so-called “Newport of the west,”  where you can ooh and ahh at caverns, arches, ice slides, an ice maze, crawl tunnels, the arctic alcove (a popular spot for proposals) and more. To boost your holiday activities quota, you can take a horse-drawn sleigh ridge along the shoreline of Lake Como. Due to the shorter winter season in Lake Geneva, Ice Castles in Wisconsin typically doesn’t open until late January and only remains open through late February, weather permitting. 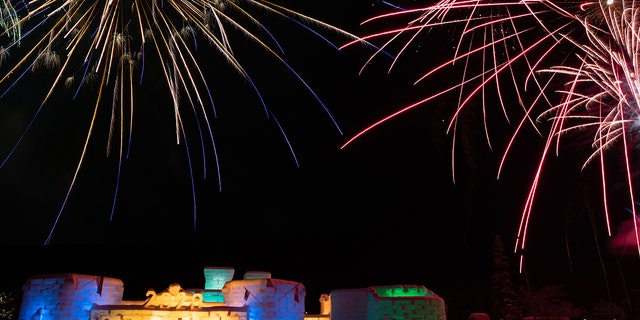 This free attraction alone is well worth a visit to the charming mountain town of Saranac Lake. At the winter carnival, the ice palace is the pièce de résistance, erected on the shore of Lake Flower’s Pontiac Bay and built similarly as it was in 1897, the first year the palace revealed its shimmering, glimmering self. Using ice harvested from Lake Flower with 1,500 blocks stacked atop each other, this ice display is built by volunteers. Visible for the duration of the carnival Feb. 4 to 13, 2022,  heavy equipment is now used to help make the labor easier, but the communal spirit of neighbors coming together to make something special is ever present. 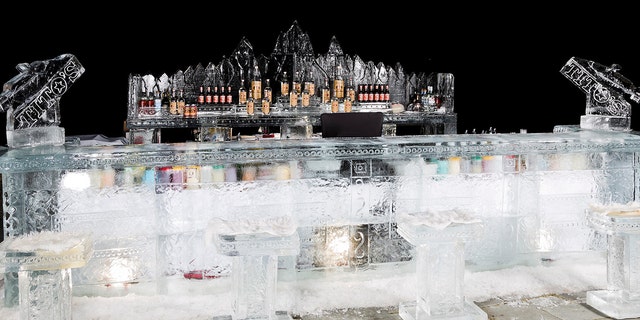 Yes, grown-ups can enjoy a good old-fashioned ice castle excursion, but for some adults-only fun, it’s tough to outshine this ice bar and lounge put together by ice sculptors and designers who devote weeks to chiseling down 300-pound blocks of ice to fashion bars, seats, tables, ice luges, couches and sculptures. Fire lamps and faux-fur cushions round out the mix as you sip on hits like a “snowball martini or “Old Man Winter” and warm up with New England clam chowder and chili. There’s live music at night and the bar will be open Jan. 14-15 and Jan. 21-22, 2022, with free access for hotel guests and $25 for outside visitors. 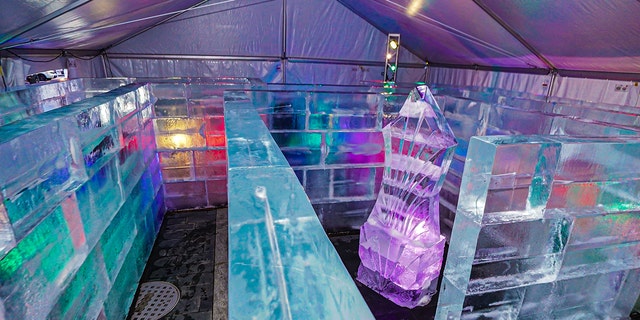 Our nation’s capital recently welcomed the return of the Ice Maze at The Park at CityCenterDC, a mixed-use development and public park. The free, interactive experience surpassed its previous ice records, with a 130,000-pound clear ice maze accompanied by multicolored lights. This year, the maze was created by 10 international award-winning sculptors and ran in mid-December for three days. Ice activations have been a tradition at CityCenterDC for the past five years, and an announcement will come in 2022 as to what surprise guests can expect in the new year.