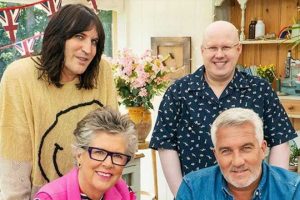 Who had the Great British Bake Off being turned into a feel-good musical on their 2022 bingo card?

As we continue to slog through what feels like an endless January, we’ll take life’s small comforts in whatever way we can find them. That ranges from sipping perfectly-mixed hot chocolate, to browsing glamorous tableware,to watching our favourite comfort TV show being brought to life on stage.

Yes, you heard us right. The Great British Bake Off is being turned into a stage musical – and you can buy tickets now.

The new stage show, titled Great British Bake Off: The Musical, will premiere at Everyman Theatre in Cheltenham, Gloucestershire, on 22 July.

The musical will follow the format of the beloved Channel 4 programme and see amateur bakers compete to impress the judges and battle their way to be crowned champion star baker.

Anyone who follows GBBO knows well that it’s often the breeding ground for high emotion, nail-biting drama and cheeky humor, so what better combination to form what we’re already calling the feel-good show of the year.

No cast has been announced yet but per the show’s synopsis, eight bakers will be featured in story, alongside two judges and two presenters (the formers likely modeled after judges Paul Hollywood and Prue Leith, and hosts Noel Fielding and Matt Lucas).

“Take eight amateur bakers, add two presenters, two iconic judges, the most delicious original score, and the result is the ultimate showstopper!” the site reads. “Find out who will triumph as Star Baker, and who will fall foul of a soggy bottom. Expect heart-warming characters, ounces of laughter and mouth watering music in this brand-new and original British musical, suitable for the whole family.”

Great British Bake Off: The Musical will also feature an original score written by the award-winning writing duo Jake Brunger and Pippa Cleary, as well as West End stars and musicians. The musical will be produced by Mark Goucher, whose other touring productions include Hairspray and Priscilla: Queen of the Desert.

Goucher said: “The TV phenomenon Great British Bake Off gets to the heart of the nation, and for a long time I felt that it could work wonderfully well on the stage.

“We started working on the production a couple of years ago and with this talented creative team and in association with the TV show’s creator, I hope we have created a musical comedy that will win over our audiences here at the Everyman Theatre.”

If we get even an ounce of the joy that the likes of Rahul, Jurgen and Nadiya gave us out of the performance, we’ll be happy.

On your marks, get set, book!

Tickets are on sale now for the run, currently scheduled from 22 July though 6 August 2022.