'The greatest wildlife show on earth': Why safaris need saving 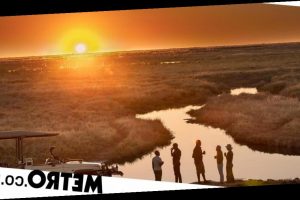 Park beside the Serengeti National Park’s Mara River in September or October and you’d usually join dozens of other safari jeeps.

For this is when and where the Great Migration reaches its camera-grabbing apex, as humongous wildebeest herds dramatically ford the Mara and lion, leopard or crocodile pounce.

Last month, however, one visitor reported being the only tourist present as the wildebeest crossed. Such a description is near impossible to envisage for anyone who has tracked the migration in Tanzania this millennium.

For that single soul, it sounds like splendid isolation – just imagine having a whole Unesco heritage site to yourself to witness the greatest wildlife show on earth.

Safaris have provided many of my life’s greatest moments: the icy thrill of a lion looking right at me, or the exhilarating shock of being sprayed in mud by a cantankerous elephant.

A high proportion of jobs in the likes of Malawi, Zimbabwe or Zambia are tourist-dependent – Kenya alone has reported a 56 per cent rise in ‘bushmeat’ seizures (from Kenyans hunting the likes of gazelle, monkey or even giraffe) since the pandemic began, and illegal logging and charcoal production have also escalated.

That tourist income also helps to fund conservation measures – most preciously, security patrols to deter poachers who hunt endangered rhino or elephants. Without the tourists, ‘the last ten years of conservation gains are at risk,’ says John D Bernstein, an African expert at charity The Nature Conservancy.

However, I see rays of hope. Most of the main safari countries have reopened their borders.

That, in turn, strengthens the African Travel and Tourism Association’s petition to our government for air bridges to Africa – until this weekend not one mainland African country featured on a British ‘travel corridor’ (and it’s still only two).

This is despite many safari destinations constantly posting Covid case numbers below the UK threshold.

And elsewhere there are initiatives aplenty. Ecotourism operators such as Wilderness Safaris and African Bush Camps have heroically stumped up to maintain anti-poaching measures.

The latter has also launched a World Safari Day on November 25 to build awareness and is auctioning a luxurious six-night Botswana trip led by legendary guide Beks Ndlovu.

During the pandemic, East Africa’s Elewana Collection of luxury lodges launched a fund to support communities.

Another travel firm, &Beyond, has been live-streaming safari drives, bringing to its guides, in the absence of income, the tonic of viewer interaction and expanded customer bases.

Those broadcasts provide inspiration and are a reminder that a one-off opportunity awaits for anyone willing to visit soon, just like beside the Mara River. ‘I’ve never seen it so quiet,’ confirmed that same, lone visitor’s guide, ‘and I probably will never again.’

END_OF_DOCUMENT_TOKEN_TO_BE_REPLACED

END_OF_DOCUMENT_TOKEN_TO_BE_REPLACED
We and our partners use cookies on this site to improve our service, perform analytics, personalize advertising, measure advertising performance, and remember website preferences.Ok