Home » Travel » The Hot List: Kickstart 2021 with travel deals from Hilton and BA

The Hot List: Kickstart 2021 with travel deals from Hilton and BA 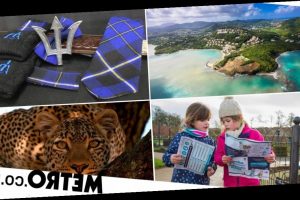 It’s finally 2021 and many of us are be dreaming of a chance to get back outside again.

With fantastic deals on flights and hotels, clothes aren’t the only things you can shop online in the January sales.

Or if you’re looking for something a little clsoer to home, the National Trust is launching an adorable outdoors Beatrix Potter trail, so little ones can enjoy all the magic of helping their favourite characters while staying socially distanced.

National Geographic Wild is running a ‘pawsome’ Big Cat Week from February 1 to 5. It starts with Cecil: The Lion King, narrated by Chris Packham, and also includes a documentary called The Jade-Eyed Leopard by conservationists and wildlife filmmakers Beverly and Dereck Joubert.

The five days of programming will highlight the concerning plight of big cats. With eight new premieres, it’s one to catch. Find Nat Geo Wild on Sky (channel 129), Virgin Media (channel 266) and Now TV, among others.

If you see a man in a kilt next time you visit this tropical isle, it’s less likely to be a Scotsman on holiday and more likely to be a local. Barbados has become the first Caribbean island to be awarded its own tartan, in recognition of the shared heritage between Barbados and Scotland.

This is celebrated every year with the Barbados Celtic festival, held in May, which features folk music and food from all Celtic countries it has ties with, including Ireland and Wales.

Created by the Glaswegian company James Robertson Kiltmaker, the tartan is a bespoke contemporary design using the blue, yellow and black national colours of Barbados. It also features a special broken trident, the national symbol that marks Barbados’s split and subsequent independence from the UK.

Hilton is also getting in on the January sale act. If you book this month, you could save up to 25 per cent off the price of a bed for a night at more than 5,000 Hiltons across Europe, the Middle East and Africa.

Available for stays up until March 31, it applies to Hilton brands including Waldorf Astoria, Conrad Hotels, Canopy by Hilton, Double Tree, Curio and more.

You could be enjoying the views from the 50-storey Conrad Dubai from £73pn, soaking up some literary culture at Conrad Dublin from £142pn or staying slap bang in the middle of London’s West End at the The Trafalgar St James London from £152pn.
All bookings are flexible. To find out more visit their website here.

Grab the family and get outdoors with a Peter Rabbit winter adventure activity trail around some of the National Trust’s beautiful gardens and parklands, in partnership with Penguin Random House UK.

Running throughout January at more than 80 National Trust places across England, Wales and Northern Ireland, it lets young nature adventurers lend a hand to some of Beatrix Potter’s well-loved characters – such as Squirrel Nutkin and Jemima Puddle-Duck – who need some help finding items to see them through the cold winter months.

The children will solve the clues to earn their special trail badge and certificate, and there are nature-themed active challenges to try along the way, as well as a Peter Rabbit selfie station at the end of the trail where everyone can take a picture with their favourite storybook rabbit.

British Airways has launched its January sale, offering deals on flights and holidays to more than 100 destinations with flexible bookings as standard. Flight-only deals will see returns to New York from £269 or sunny St Lucia from £379 return, while seven-night European beach packages to the likes of the Algarve, Malta and Malaga start at £189pp.

Further afield, seven-night holidays to Mauritius start at £699pp, while a break to Las Vegas starts at £369pp. Book by February 2, 2021. Find out more here.