Home » Travel » The Quiet Strength of an Old-Growth Forest

The Quiet Strength of an Old-Growth Forest 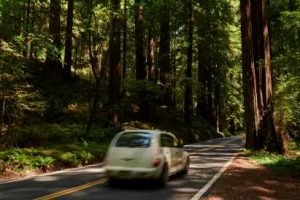 In a grove of old-growth trees, in Northern California’s Humboldt Redwoods State Park, emerald-tinged light filters through a dense green canopy. Fallen tree trunks are coated in a riot of fluorescent green growth and crescent-shaped oyster mushrooms. Stumps, 20 feet wide, are obscured with budding wildflowers and ferns. Earlier, I drove along the Avenue of the Giants, a 31-mile scenic road that winds through a tunnel of green and gold.

It’s May 2021, and surrounded by these 500-year-old giants, I feel a needed sense of calm. After a year of terrifying change, deadly disease, sociopolitical unrest and raging fire, the forest remains a place where I can come to be still. But stillness is an illusion here. The redwoods, seemingly unmovable, are always growing and adapting to the changing world around them. Their existence is proof that nothing, even the worst of times, lasts forever. And when you’ve been alive for hundreds or even thousands of years, there’s a strong chance you’ve seen it all before.

Redwoods are a beloved fixture of the West, beautiful and soaring with thick, almost furry red-hued bark, deep trunk grooves and lush green needles. They can grow more than 300 feet high and 30 feet wide, and can live for hundreds if not thousands of years — the oldest redwoods in California are between 2,500 and 3,200 years old. 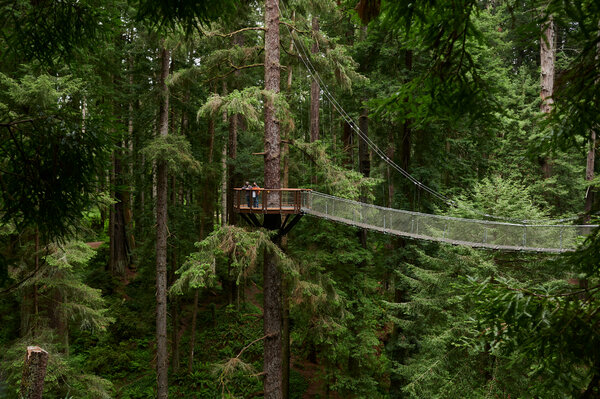 Californians like myself are possessive of them because they are ours — both coast redwoods and giant sequoias are only found from Central California up to southern Oregon. Historically, we have treasured them for their durability — much of the West was built with redwoods, which were logged to great profits. Now, more attention is being paid to the value and importance of these trees and forests: the ecosystems they create, the wildlife they protect, the mental benefits they provide human visitors and the essential role they play as the world stares down the barrel of climate change. That’s all the more potent considering just how little are left, tenuously preserved in small stands across the West.

I grew up in the Bay Area, where redwoods have always been a part of the landscape. But it wasn’t until this devastating past year, when forced to limit my wanderings to within driving distance of my house (built from hardy redwood planks in 1907) and spurred by multiple readings of Richard Power’s 2018 novel “The Overstory,” that I found myself seeking out the solace of big, old trees.

I first heard of Covid-19 while camping in a grove of coastal redwoods in January 2020 in Big Sur. I was hiking in the backcountry among giant sequoias in Sequoia National Forest and Yosemite National Park last summer, while hundreds of fires burned millions of acres across the state. I have searched for these trees more intentionally in recent weeks — standing among the fairy rings in Humboldt, understanding how to tend to the forest more intentionally at the Redwood Forest Institute in Willits and exploring the recovery efforts at Big Basin Redwoods State Park in the Santa Cruz Mountains, where acres of flora remain charred black from last year’s fires.

Though redwoods are only found on the West Coast, other old-growth forests can be found around the world, from beech pine stands in Ohio to Douglas fir groves in the Pacific Northwest. There’s not a single, agreed upon definition of an old-growth forest; the term was first used by ecologists in the 1970s describing forests that are at least 150 years old with a diverse ecosystem and are largely undisturbed by human impact and intervention.

We’ve been cutting down trees for thousands of years, but human impact reached new levels with the industrialization of the timber industry, in the late 19th and early 20th centuries, and the rise in clear-cutting, in which entire forests are razed for more efficient timber production. While efforts have been made to replant trees, research in recent decades has sought to show the importance of the diversity found within old-growth forests around the world, versus the near-monoculture of replanted stands of trees. Old-growth forests, particularly redwood forests, are critical actors removing and storing carbon from the atmosphere. And these forests are social systems, with trees sharing resources and information through fungal networks.

Now, less than 10 percent of old-growth forest remains in the United States. Logging of these trees has largely been off-limits since the Clinton Administration, with President Biden just recently overturning policy changes made by the Trump administration to open the Tongass National Forest in Alaska to logging. The Forest Service, an agency of the Agriculture Department, could not comment on the status of plans to log other mature forests throughout the West.

Dr. Suzanne Simard, a professor of forest ecology at the University of British Columbia, has dedicated much of her career to studying the connectivity of old-growth forests and, more recently, the concept of the “Mother Tree.” Her research shows that the largest, oldest trees within a forest system can act as resource hubs, sending carbon and nitrogen to seedlings through fungal networks, prioritizing their genetic relatives. Dr. Simard believes that understanding the complex connections within the forest is essential for both the trees’ survival and our own.

“These trees are our ancestors,” she said. “When you get into the forest, you fall in love, almost right away. It’s in our genes.”

The benefits of spending time in nature are well-documented, from reducing stress to improving cognitive functions like attention and memory. The pandemic heightened our awareness of just how important, and restorative, being outdoors could be and how problematic it can be when access to those spaces are limited.

In addition to preserving the remaining stands of old-growth, Dr. Simard believes that it’s equally important to cultivate healthy, younger forests that have the potential to become old-growth environments in the future.

That’s one goal of the Redwood Forest Institute, a nonprofit founded by Charles and Vanna Rae Bello in 1997. The couple bought 400 acres of second-growth forest, acres that 100 years ago had been clear-cut, in California’s Mendocino County in 1968 and 1978. Charles, 88, is an architect by training and transformed the land into an off-the-grid Eden with a swimming hole, art gallery and multiple homes that blend sensuously into the landscape. He has selectively cut trees and let the larger, dominant redwoods grow.

One thousand of these trees are tagged with small aluminum discs, proof that they have been added to the Institute’s land conservation easement, protecting them in perpetuity and allowing them to be tracked and monitored. In addition to protecting the trees themselves, Mr. Bello has worked to create a space where people can learn about their importance, while experiencing the joys of communing with nature.

A $250 donation to the nonprofit and a bumpy ride down a rutted dirt road have gotten me to a one night’s stay in the Institute’s Parabolic Glass House, designed and built by Mr. Bello in the 1990s. The curving glass side of the house frames a panoramic view of the forest beyond. I was staggered on arrival, only to find myself lost in the view with every change of the light.

Mr. Bello is keen to inspire others to love and care for the forest and still finds so much to learn from the continuous adaptability of the redwoods.

“People should be stewards for the forest,” he said. “When else in life are you going to have a chance to save a tree that could live for 2,000 years?”

California burned with a fury last summer and fall. The wildfire season, the state’s worst on record, started earlier, with fires spreading faster and tearing up areas that previously had been thought to be protected from or at least resistant to blazes, ultimately burning more than four million acres.

Fire is nothing new in the West or to redwoods, as evidenced by burn scars in their stumps or the hollowed-out trunks of burned trees, still standing a hundred years later. But 2020 was unprecedented, at least in living memory.

The CZU Lightning Complex Fire tore through 97 percent of Big Basin’s 18,000 acres in just 24 hours. The state park is still mostly closed to visitors, but I drove up to a roadblock on the park’s southern flank to meet Joanne Kerbavaz, a senior environmental scientist with California State Parks. As I followed her down into the burn site, I was hit with a gut punch of emotion. Where the Avenue of the Giants had been a kaleidoscope of green, this was a visual negative, all black and sepia.

“We know redwoods have been in California for probably two to 20 million years. During that time, they’ve experienced plenty of extremes. But since we’ve been measuring,” Ms. Kerbavaz said, “last August was very extreme.”

Like everything in our current world, the road trip, a classic American experience, has changed.