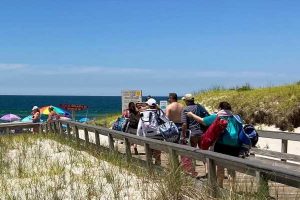 ISLAND BEACH STATE PARK, N.J. — As New Jersey residents prepare to head outdoors for the Fourth of July, the state’s parks are already seeing an explosion in popularity, with more than 100,000 people signing up for annual park passes as part of New Jersey’s COVID-19 vaccine incentive.

Democratic Gov. Phil Murphy announced in May that any state resident who has at least one shot by July 4 can get a free state parks pass, which would cost $50 for residents this year.

The 100,000 signups is up from nearly 50,000 earlier this month, weeks after the program was announced, according to the state Department of Environmental Protection, which oversees New Jersey’s parks. It dwarfs the roughly 5,000 annual passes typically purchased in a year.

Although it’s not clear how many people were motivated to become vaccinated by the free parks pass, the state eclipsed its goal of 4.7 million vaccinations last week amid the allurement.

The COVID-19 lockdowns of 2020 already had more people heading outdoors, as the number of Americans who went hiking last year rose by 8.1 million, the largest one-year gain on record, according to the Outdoor Foundation, the philanthropic arm of Outdoor Industry Association.

On a recent weekday, a parking lot at Island Beach State Park, a 10-mile (16-kilometer) stretch of mostly undeveloped shoreline and one of the state’s most popular beaches, was packed but not filled to capacity. The beach-side bar at the park was humming with patrons. Colorful umbrellas flapped in the ocean breeze.

The Department of Environmental Protection urges park-goers to arrive early to be sure of a spot in parks like Island Beach that frequently reach capacity — as passes don’t guarantee entry.

Linda Jakuboski, of Pine Beach, said she’s been coming to Island Beach for 35 years and noticed it seemed busier than usual for a weekday. She didn’t get the vaccine pass incentive, but did get the shot. If the spike in annual passes leads to crowding, she’s prepared to get there early and frequent one of the less crowded sections of the beach.

“I’m just so used to being here. This is home,” she said. “This is like a second home, really.”