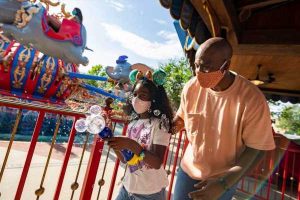 But, finally, on Friday, California residents were able to return.

And they were thrilled to be there. The enthusiasm was palpable Friday as guests streamed through the gates, and many took to social media to express their joy at being back at one of Southern California’s top attractions.

Instagram user @__arielsea had more than just Disneyland’s opening to celebrate. She posted an engagement photo in front of Sleeping Beauty Castle, with the happy couple showing off Disneyland “Just Engaged” buttons.

They weren’t the only ones to get engaged. One Disney cast member told USA TODAY they were aware of at least four proposals that had happened in front of the iconic castle by 11 a.m. Friday.  ABC 7, a TV station out of Los Angeles, posted on social media that Jason Maciel and Carla Martinez were likely the first couple to get engaged at Disneyland on Friday.

Even Bob Iger, Disney executive chairman and former CEO, got in on the social media excitement, welcoming back cast members and guests on Twitter. The Twitter account @MiceChat posted a photo of a masked Iger and noted that he was “taking pictures like everyone else.”

CEO Bob Iger is at #disneyland today taking pictures like everyone else. 🙂 pic.twitter.com/uHLhwgvT6W

A truly happy day at the happiest place on earth, @Disneyland! To our cast and our guests, welcome back! pic.twitter.com/VxyWrVCL0I