Home » Travel » What to Do This Summer: Chapel Hill, N.C.

What to Do This Summer: Chapel Hill, N.C. 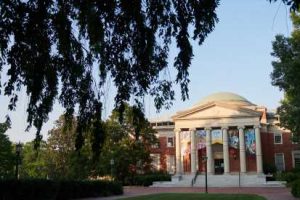 A liberal enclave in a right-leaning state, Chapel Hill, N.C., a hive of college activity during most months of the year, makes for a relaxed and entertaining summer getaway. The heat can be intense, but adopt the local habits of relaxing under ceiling fans and drinking plenty of ice-cold sweet tea, and you’ll be able to get the most out of the area’s many vibrant restaurants and cultural spots without breaking too much of a sweat.

“We kind of have the town to ourselves for another few weeks,” Jessica Stringer, the editor of Chapel Hill Magazine, said in late July, referring to the annual summer lull when most local college students are away. Some popular new stores and cafes have opened their doors over the past year or two, Ms. Stringer said, while many of the bars and restaurants that expanded their patios during the pandemic have decided to keep those structures in place for the summer.

With one of the highest vaccination rates in North Carolina, Chapel Hill’s Orange County was averaging just 11 new cases per day — or roughly 7.3 cases per 100,000 people — at the end of July. Masks are required inside buildings on the campus of the University of North Carolina at Chapel Hill, with only a handful of exceptions; several stores around town ask guests to mask up as well.

Leafy, informal and eager to chat, Chapel Hill regularly ranks among the best places to live in the United States, and a visit that concentrates on the downtown area, the university campus and neighboring Carrboro — so close that it feels like an extension of Chapel Hill — quickly reveals why.

Franklin Street, Chapel Hill’s main drag, has a few notable mainstays, including the homey, wood-paneled Carolina Coffee Shop and Sutton’s Drug Store, a diner-cum-pharmacy that has a devoted local following; both establishments have been around for nearly a century.

A number of other shops and cafes have come and gone over the years, but one recent arrival seems likely to stick around: Epilogue Books Chocolate Brews, which opened in 2019 and is already expanding (109 East Franklin Street, Suite 100). An independent, Latinx-owned bookstore and cafe, Epilogue offers a curated selection of books, including from local authors, L.G.B.T.Q. authors and authors of color — with plenty of handwritten staff recommendations to help you make your choice. Take a break at the on-site cafe, which serves up fresh pastries, empanadas and churros, as well as high-end coffees, teas and thick Mexican hot chocolate. You can either sit in the colorful front seating area under the gaze of Frida Kahlo or grab a table on the sidewalk outside. The new section of the store, which will sell used books, is scheduled to open this summer.

With its breezy wraparound porch and bottomless sweet teas, Mama Dip’s Kitchen is a welcome respite from the heat (408 West Rosemary Street). The restaurant was founded by Mildred “Mama Dip” Council, whose decades of work supporting diversity and integration in the Chapel Hill community earned her an invitation to the White House from George W. Bush; she was also pen pals with the Obamas. Mama Dip died in 2018, and her children now manage the restaurant, which continues to serve time-honored Southern favorites like fried chicken, sweet potato biscuits, hush puppies, black-eyed peas, pecan pie and banana pudding (dinner for one, about $15 to $20). This summer, the restaurant is also offering picnic baskets and cookout boxes, so you can enjoy your Southern feast wherever you like.

When it comes to the music scene, the Chapel Hill area has tended to punch above its weight, with homegrown acts like James Taylor and Ben Folds Five as well as a few notable music venues, including Cat’s Cradle in neighboring Carrboro, which, in various locations over the past half a century, has hosted national acts like Nirvana and Public Enemy, John Mayer and Joan Baez. This summer, you can get a free taste of the local music scene at Fridays on the Front Porch, an open-air concert series that runs every Friday evening (weather permitting) through early October. Beer, cocktails and ice cream are all on sale, and a couple of food trucks offer heartier fare. It all takes place on the manicured front lawn of the Carolina Inn, the grande dame of Chapel Hill hotels, just on the edge of campus (211 Pittsboro Street).

Spend a few hours exploring the parklike central campus of the University of North Carolina at Chapel Hill, one of the oldest public universities in the United States and the beating heart of Chapel Hill. Snap a photo of the Old Well; wander through the shaded pathways of Coker Arboretum; or catch a weekend star show at Morehead Planetarium (tickets must be booked in advance). In McCorkle Place, look out for the Unsung Founders Memorial, which commemorates “the people of color, bond and free” who helped shape the university’s history. There’s no plaque to mark the site, but just a stone’s throw away (heading toward Franklin Street) is the spot where, in 2018, protesters toppled the Confederate memorial statue that was widely known as Silent Sam. Guided campus tours are on hold for now, but you can pick up everything you need for a self-guided tour at the U.N.C. Visitors Center (134 East Franklin Street).

Mention Chapel Hill to any American, and there’s a good chance they’re going to want to talk to you about basketball. If you need to catch up on your stats, the Carolina Basketball Museum is the place to go (free admission; 450 Skipper Bowles Drive). Come and count the gleaming trophies, hear the student chants, watch old footage of buzzer-beating shots and soak up the history of the storied U.N.C. men’s basketball team. Carolina fans will delight in reading the 1980 letter that Mike Krzyzewski, the coach at archrival Duke University, sent to a young Michael Jordan (who would go on to become Carolina basketball’s most famous alumnus), expressing his polite regret that Mr. Jordan wasn’t interested in learning more about Duke.

Slide straight to the other end of the cultural spectrum with a tour of the university’s Ackland Art Museum, which houses several temporary exhibitions as well as an eclectic selection of works drawn from the museum’s permanent collection of more than 19,000 objects (free admission; 101 South Columbia Street). Paintings by Peter Paul Rubens, Camille Pissarro and Gilbert Stuart were among those on display on a recent visit, as were ancient Greek and Roman sculptures and a diverse selection of Asian art. This summer, the museum is also hosting a temporary exhibition featuring European and American drawings, watercolors and collages, as well as a bewitching series of etchings that the American artist James McNeill Whistler made in Venice in the late 19th century.

Wander west down Franklin Street and in about a mile you’ll find yourself in Carrboro, a progressive town that merges seamlessly with Chapel Hill. There’s a lot of local pride in Carrboro, especially when it comes to the farmers’ market, which has been showcasing local produce and handicrafts for more than 40 years (301 West Main Street). Stop by on a Saturday morning and take your time browsing the fresh-cut flowers, pasture-raised meat, cheeses, ceramics, woodwork, breads and pastries (look out for the sweet potato cake doughnuts), and of course cucumbers, beets, corn, green beans and tomatoes galore — all from sellers who live and produce their goods within a radius of 50 miles. The market also runs on Wednesday afternoons in season.

With a population of only about 21,000, Carrboro — or “the Paris of the Piedmont,” as some locals like to call it — is unexpectedly rich in cafes and restaurants. Kick off a lazy morning with a cappuccino and pastry in the living room-like Open Eye Cafe. For lunch, try the heirloom tomato salad on the patio at Tandem or load up on the hot bar at Weaver Street Market, both in or around Carr Mill Mall, a former cotton mill that was once a major employer in town. A new face on the scene is Mosaic Cafe and Bistro, which opened in June (203 West Weaver Street). A high-end French restaurant in its former life, Mosaic now serves a rotating selection of elegant and reasonably priced tapas and small plates (try the fried olives or seared scallops, if they’re available), as well as larger dishes, including pastas and miso-glazed North Carolina catfish, in a relaxed and attractive outdoor setting. Daytime cafe-style service will be added at the end of August, but for now the place is perfect for an evening of relaxed summer dining with friends.