Home » Travel » Why beautiful Belize should be on your bucket list

Why beautiful Belize should be on your bucket list 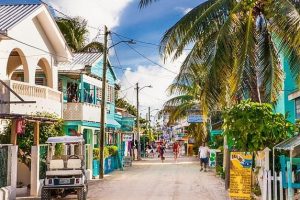 Perched on the edge of a boat anchored off the Belize coastline, a shiver of sharks glide purposefully through the clear water below. I watch in awe, fascinated by their movements. Then, taking a deep breath, I plunge in to join them.

There is no real danger, apparently, for these are passive nurse sharks and, for the most part, harmless to humans. Well, that is what the captain says, repeatedly assuring us that they won’t bite as we swim alongside them. But surely the red floating vest I had donned over my swimsuit (I’m a poor swimmer) will make me some kind of target…

However, it was an all too brief encounter, for the sharks swiftly realise there are none of the expected titbits that are often thrown their way, and they scatter. 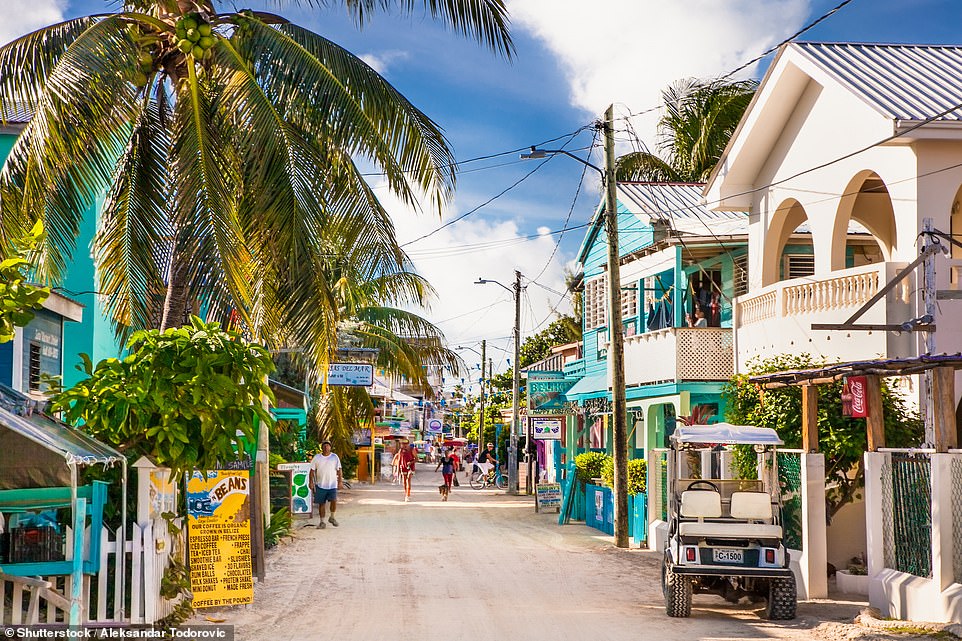 Angella Johnson started her five-day tour of Belize in Caye Caulker, a ‘little strip of paradise’ that lies 20 miles from the mainland (pictured) 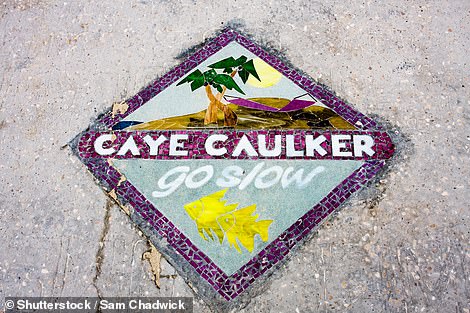 Still, I felt exhilarated by this delicious precursor to the rich sea life I would see during my five days in Belize. Like most of us, I haven’t been on holiday for two years and wanted to feel invigorated by my first trip overseas. New experiences were on the wish list. I longed to feel alive again, and Belize, it turned out, was the perfect place to do that.

Snorkelling? Tick. Mayan caves? Tick. Whether you want a scenic jungle vista or laid-back beach life, this little Central American country the size of Wales packs a punch in what it offers visitors of all ages.

Snorkelling in the balmy waters of the Hol Chan Marine Reserve, a protected area within the 184 miles of colourful coral reefs, remains a highlight of my visit. The Belize Barrier Reef is the second largest in the world – Australia’s is bigger but not so well preserved – and one of the best sites to dive or snorkel.

Surprisingly few people know much about this one-time British colony which, tucked between Guatemala and Mexico on the shores of the Caribbean Sea, is still marvellously unspoilt.

Formerly British Honduras, Belize gained independence in 1981. English remains the official language, with Spanish a very close second, and Queen Elizabeth its titular head of state. This year Belize marks the 10,000th anniversary of the reef, which is a protected Unesco World Heritage site. 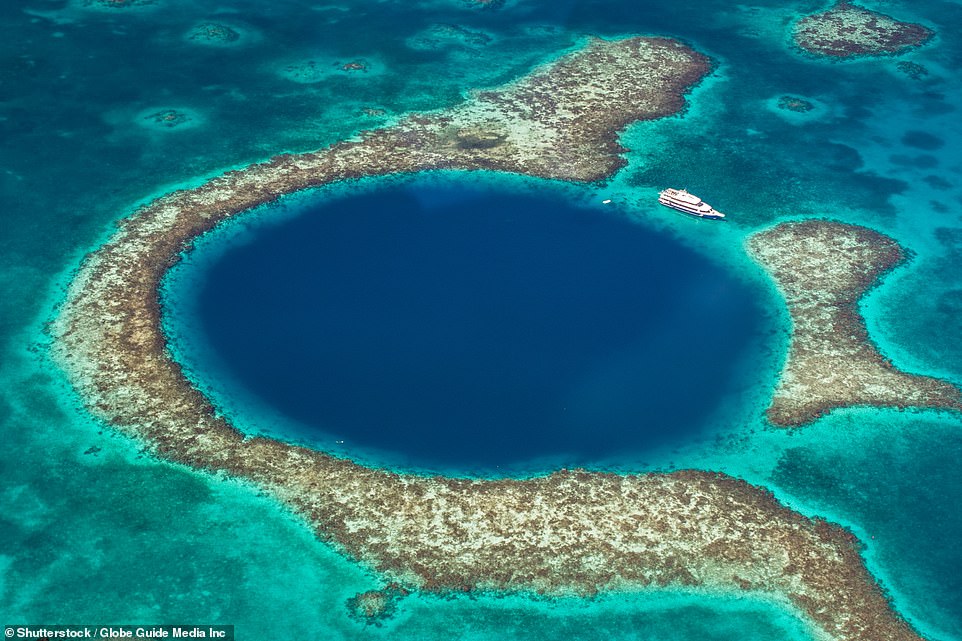 Belize is home to the Great Blue Hole, above, a mysterious crater where you can snorkel with sharks or dive to explore its stalactite-covered depths 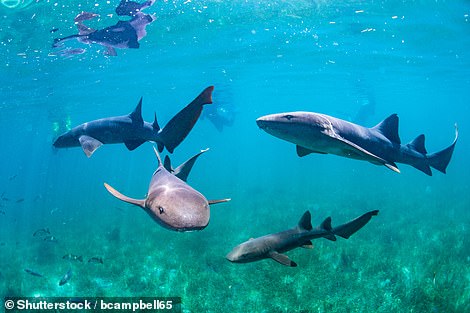 Come on in: Angella swam with nurse sharks (pictured), which are generally harmless to humans

And there is much worth protecting here. This spectacular eco-system harbours coastal lagoons, atolls, mangrove forests, sea turtles and more than 500 species of fish. It’s also home to the Great Blue Hole, a mysterious crater where you can snorkel with sharks or dive to explore its stalactite-covered depths. But the best way to take in its majesty is from the air.

One of the unexplained marvels of nature, this giant underwater sink hole measures more than 1,000ft across and 400ft deep.

Peer down from the window of a tiny Cessna plane and it seems to stare back, like a cyclops from the depth of the ocean. There are some experiences in life that you never forget, and this was definitely one. 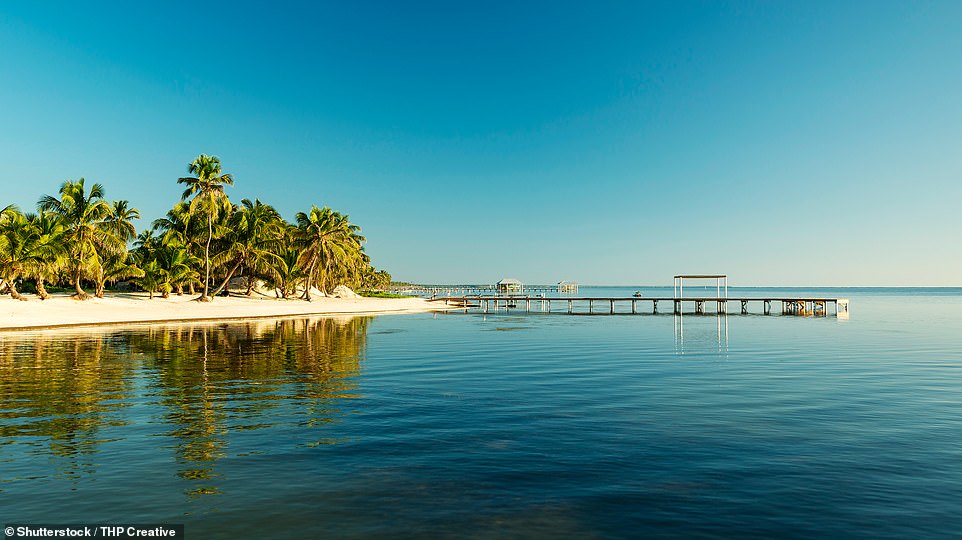 According to Angella, Caye Caulker is not as commercial as nearby Ambergris Caye (pictured above)

I flew to Caye (pronounced ‘Key’) Caulker, a little strip of paradise 20 miles from the mainland and home to Barefoot Caye Caulker Hotel, my base for three nights. The ethos here is laid-back. There are no cars, just golf carts and bicycles. ‘Go Slow’ is the local motto, as I was reminded early one morning by Keith, the dreadlocked young man who runs Cafe By The Beach, so I obligingly sat down to sip delicious coffee and watch the sunrise.

Though Caulker is not as commercial as nearby Ambergris Caye, it is a vibrant spot with bars, shops and restaurants, so don’t expect quiet nights.

For a more tranquil spot back on the mainland, the Hidden Valley Inn And Reserve is balm for body and soul. It’s tucked deep in the beautiful Mountain Pine Ridge Forest, a 7,200-acre oasis. At the end of a bumpy dirt road you’ll find an impressive colonial-style lodge surrounded by flourishing gardens. There is even a coffee grove from which they make their own brew. 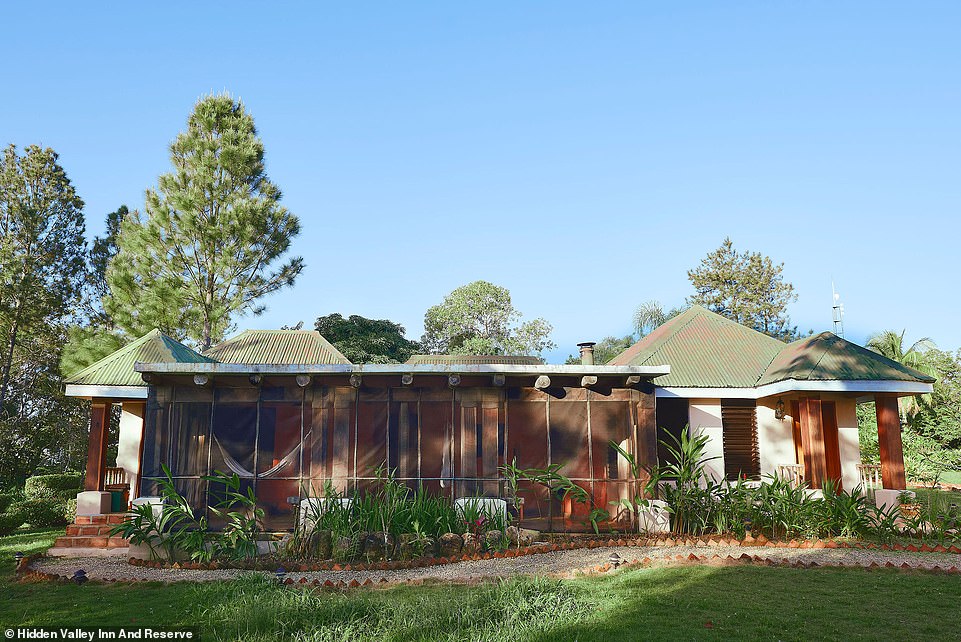 On the mainland, Angella stayed at the Hidden Valley Inn And Reserve, which she describes as ‘balm for body and soul’. Above is one of the inn’s suites 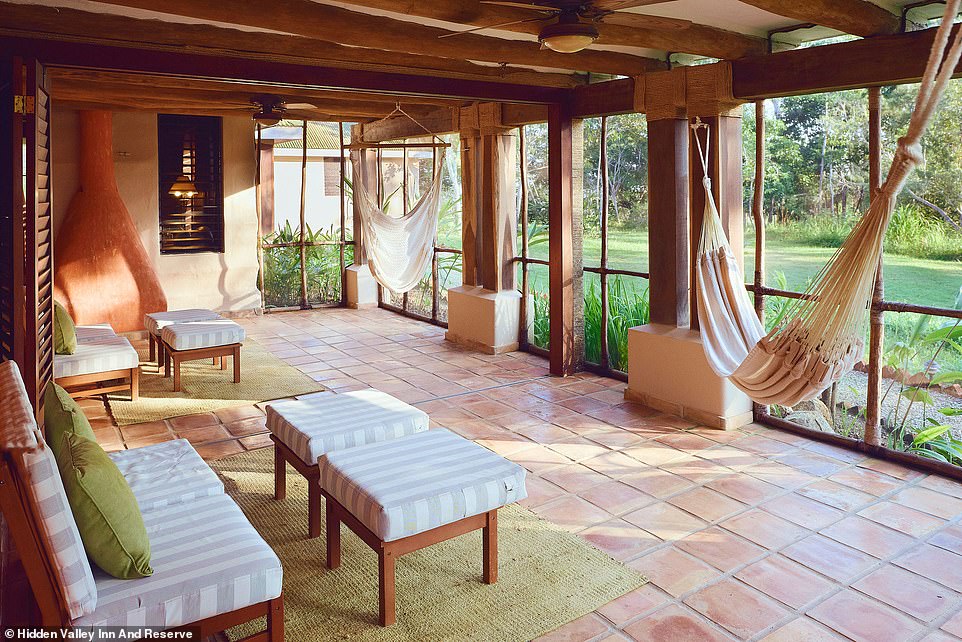 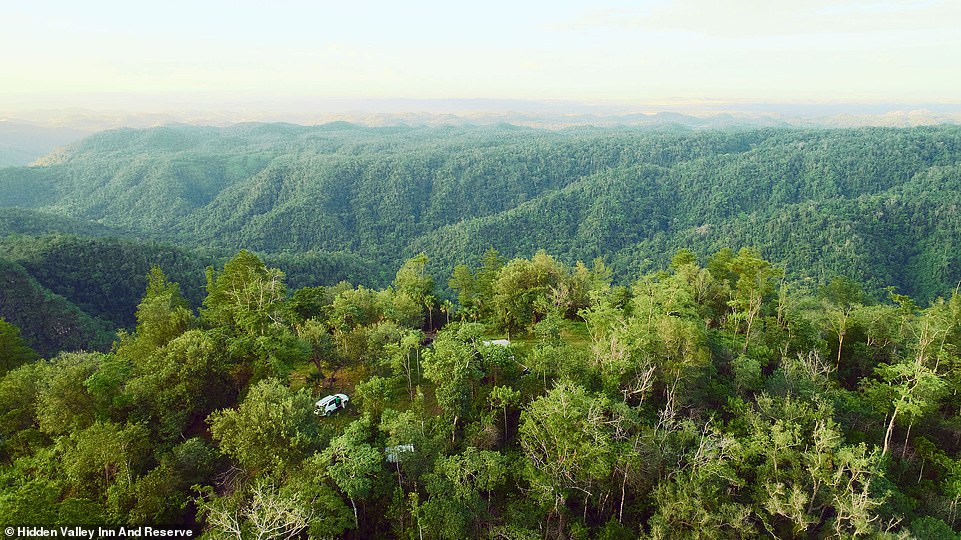 The Hidden Valley Inn And Reserve is tucked deep in the beautiful Mountain Pine Ridge Forest, a 7,200-acre oasis (above) 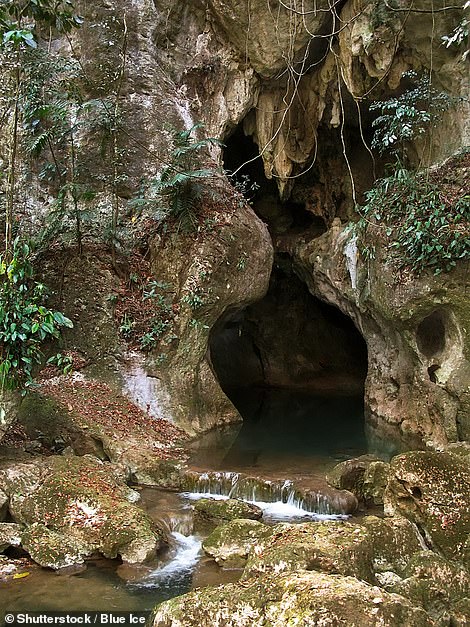 Above is the entrance to the famous Actun Tunichil Muknal caves deep inside the Tapir Mountain Nature Reserve. ‘To get there is a bit of a slog along a jungle path,’ says Angella

Just 12 cottages are dotted around a main house, each richly appointed with dark mahogany furniture and a stone fireplace I made full use of during the cool mountain nights.

Here, among the ridges and valleys, you can reconnect to nature with more than 90 miles of hiking and bike trails, or enjoy the spa treatments. It’s also a twitcher’s delight, with hundreds of species to spot. After a hike along a stream so clear I was tempted to drink the water, it was a joy to kick back in the hot tub with a relaxing cocktail.

Belize is rich with relics of an ancient Mayan civilisation. One of the most revered is the famous Actun Tunichil Muknal caves deep inside the Tapir Mountain Nature Reserve. To get there is a bit of a slog along a jungle path. I’m not the fittest, but even for me the 45-minute hike with river crossings is only mildly challenging.

Our guided party of seven (including two elderly Americans) arrive at the mouth of the caves, once used for ritual sacrifices, eager to delve into their brutal history. Then it’s a case of clambering over rocks and squeezing through narrow passages for two hours. It’s challenging but satisfying to reach the main atrium, where I’m shaken by the eerie sight of human remains left half-buried in their undisturbed state since about 580 AD. The best known of these is a calcified teenager whose bones sparkle like crystals. It’s a stunning yet macabre sight. 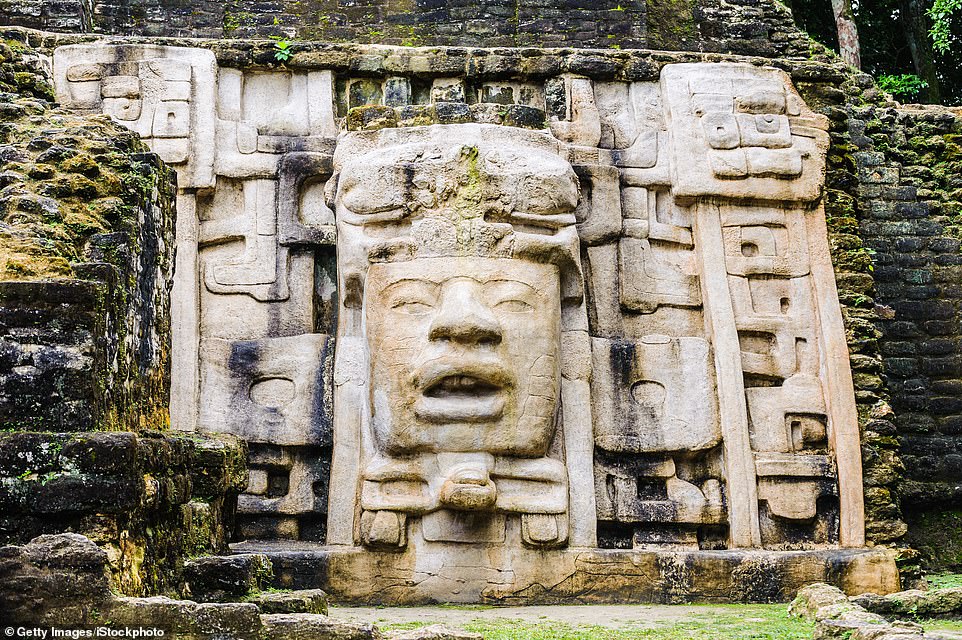 ‘Belize is rich with relics of an ancient Mayan civilisation,’ says Angella. Above is a Mayan temple at the Lamanai Archaeological Reserve 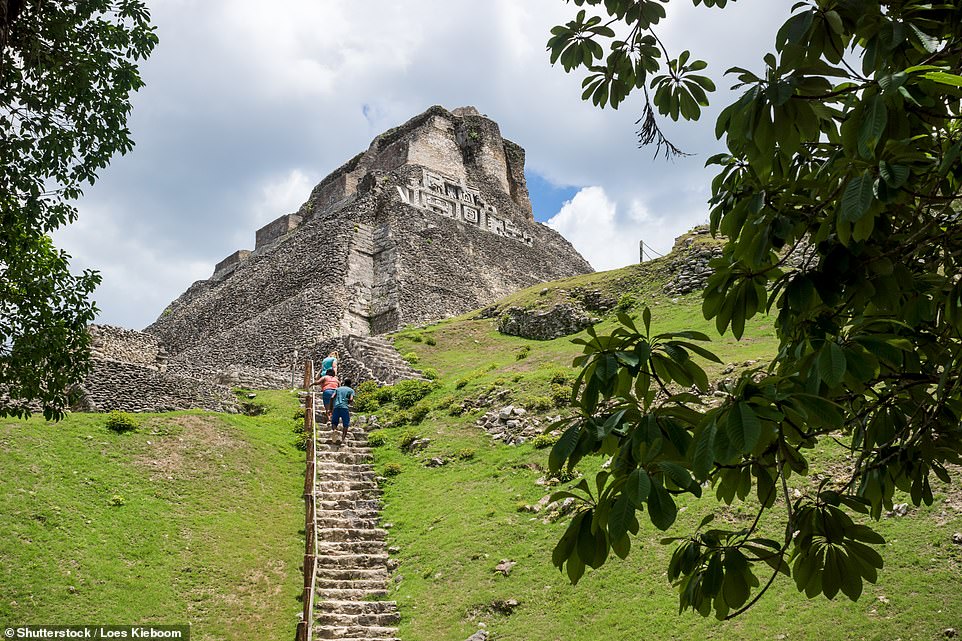 My dip into this rich history continues the next day with a visit to the Xunantunich archaeological site. Built on limestone with more than 25 temples and palaces, the largest, El Castillo, is 130ft high so I gingerly climb the crumbling steps to take in panoramic views across miles of treetops from where, on a clear day, you can see Guatemala.

From the moment I arrived in this warm and inviting country, I sensed I was somewhere special, and I left with a lingering wish to return for a longer stay.

And any country which has billboards thanking teachers for their hard work is definitely worth a visit in my book.