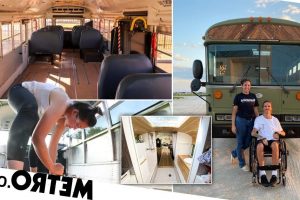 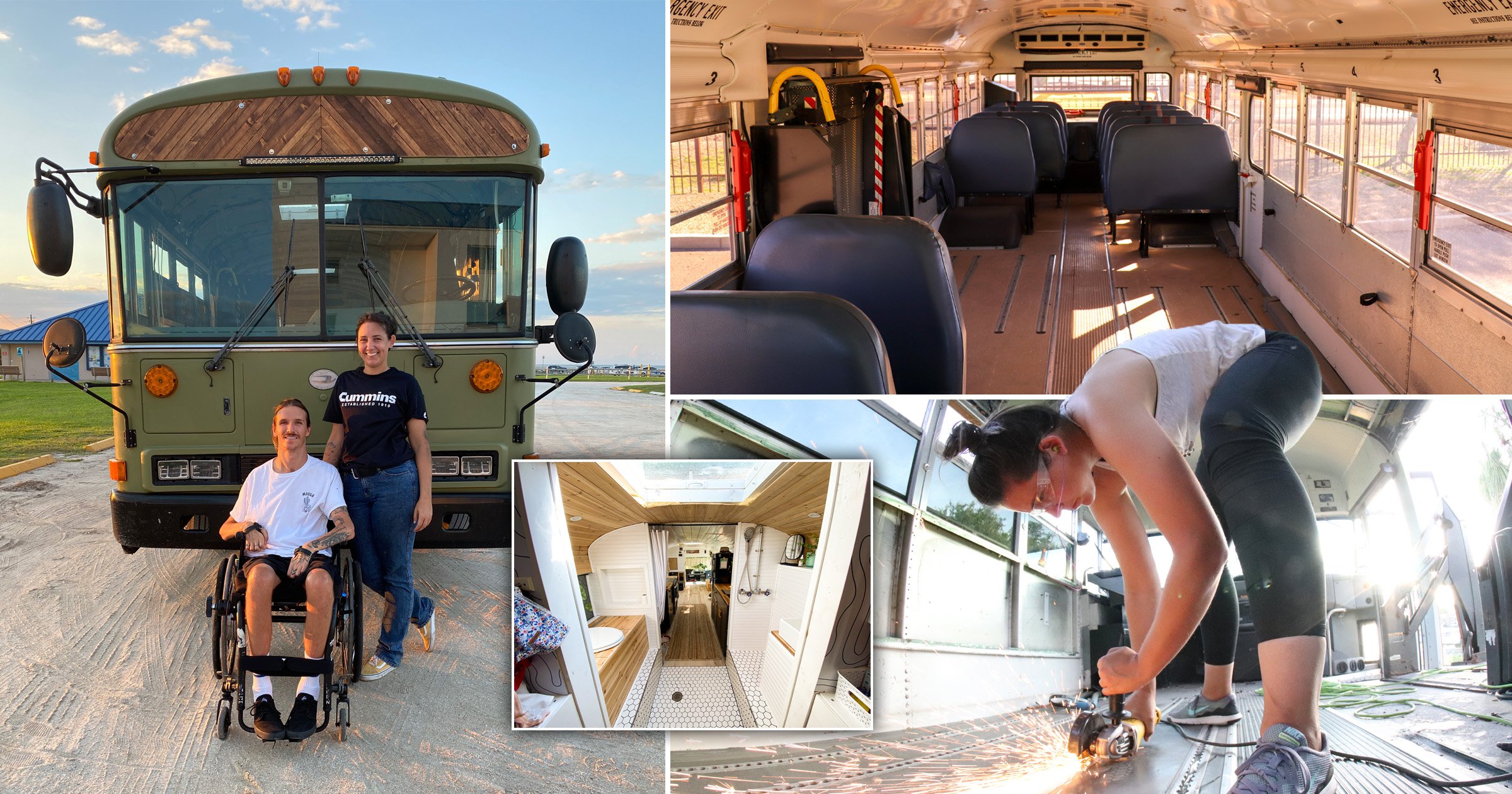 Sam Scribner, 28, was lounging in a hammock when he fell and broke his neck.

The devastating injury of his spinal cord left him paralysed in his arms and legs and needing to learn how to use a wheelchair, and destroyed his dreams of travelling the world – or so he thought.

His sister, Alex, 32, flew home to Florida, US, and put her life and career on hold to help her parents care for Sam.

He spent three months in the hospital, going from the ICU to an in-patient facility and re-learning how to exist.

During this time, Sam struggled to come to terms with his accident, and told Alex of his disappointment of not being able to go on a big adventure.

That gave Alex an idea. After doing some research, she bought an old schoolbus then set about transforming it into a wheelchair-friendly home on wheels – all so she and her brother could go on a road trip.

The first bus transformation had an unexpected ending, as Alex sold it to a woman – also using a wheelchair – she met on Instagram.

‘She also wanted to try the nomad lifestyle but she was having a really hard time making it happen,’ Alex remembers.

‘Sam and I had talked and we really wanted this not just for ourselves but as an option for anybody who wanted a shot at this life.

‘So we sold out the first bus to her and then we started over with our current bus, the second one we bought in 2020.’

For the second go, Alex spent a year and a half working on the transformation, doing all the crafting herself.

‘We both had no money or any real plan,’ she says. ‘But once we thought of the bus then we were really committed and dedicated to seeing it through.

‘The first bus we put on layaway, we split it and spent four months saving up to buy it for $6,000.

‘The second bus, we had a jump start on from the proceeds of the first bus we sold.

‘By Christmas of 2020, our story had spread a little bit, and people knew what we were trying to do so pitched in to help.

‘The biggest one was home-depot. We got in touch with our local store and they were happy to support us and help us tremendously.

‘At some point, it set in that this bus isn’t just for travelling but this is something to live in so we didn’t want to skimp on anything.

‘I wanted to know how everything worked so I would be able to fix it should something happen and not wait for help.’

By May 2021, the bus was ready for move-in, with features such as an accessible bathroom and a lift on to the bus to help make Sam’s bus life as comfortable as possible.

The DIY hasn’t stopped yet – Alex is now building a special dining table area with a bench, just so Sam can easily wheel in.

The duo hope that their story will show other people that the nomadic lifestyle really is possible for anyone.

‘People assume that this kind of living would not be possible for someone in Sam’s position, but as you can see that isn’t true,’ said Alex.

‘So if you want a nomad lifestyle go and get it.’