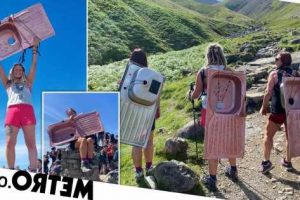 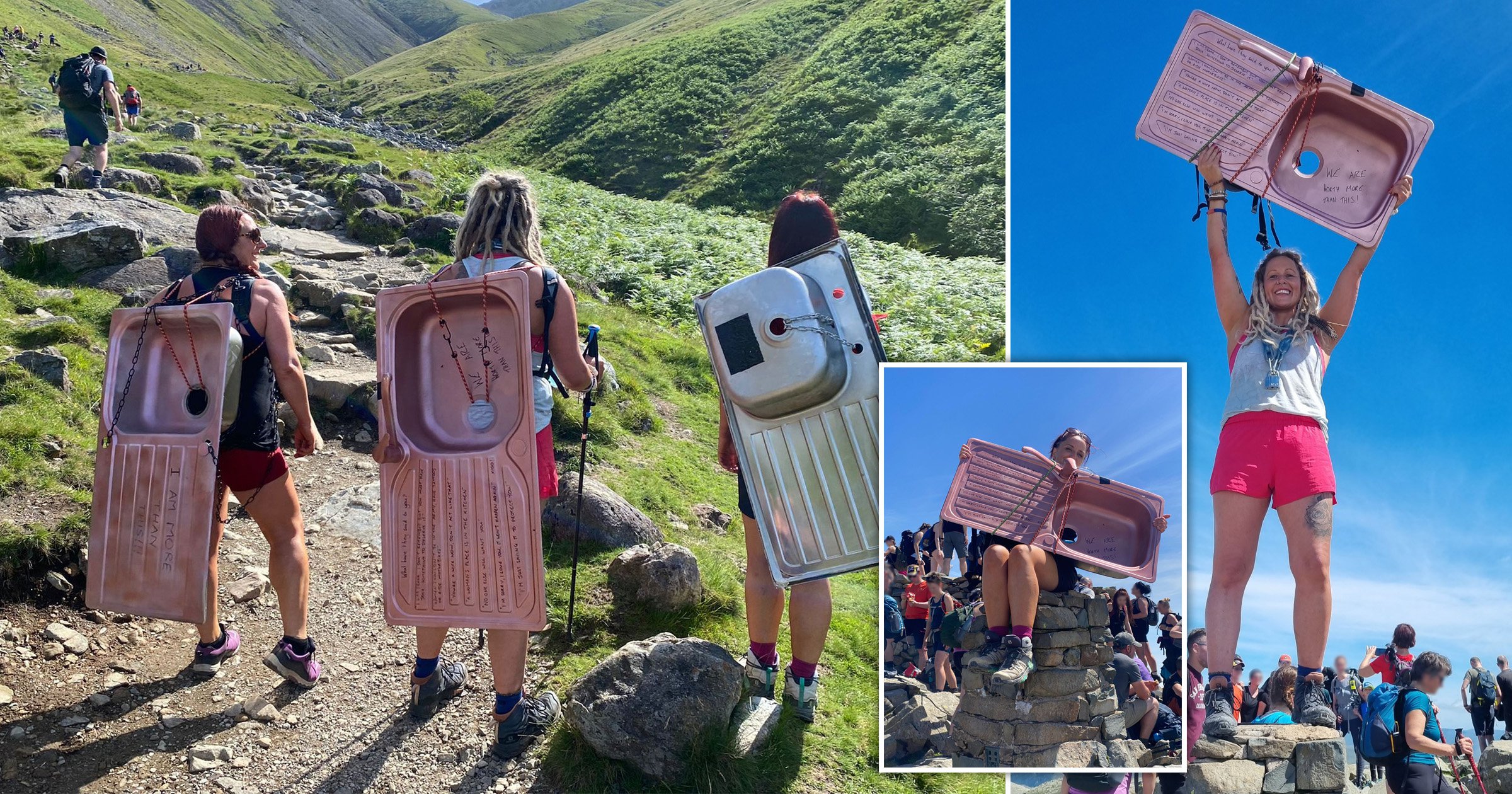 Climbing Scafell Pike is no easy feat – and that’s without lugging a sink on your back.

Three women did just this, with the sink serving as a metaphorical challenge to gender inequality and stereotypes.

Teachers Emma, 36, and April, 40, and dental nurse Zena, 40, hiked the 978 metres up to the summit on July 9 in just six hours – all to raise money for domestic abuse charity Harbour.

Alongside them, they had a team bringing water and supplies.

Emma, who is a co-founder of women’s only adventure group Wild Wanderers said: ‘We did the high heels challenge last year for Women’s Aid.

‘I absolutely loved the idea, we planned a date and put it out on the group if anybody wanted to join.

‘It was always going to be a kitchen sink because “women should be chained to the kitchen sink” is the expression that’s used quite widely.

‘We found some abandoned kitchen sinks that people were getting rid of, spray painted them and wrote sexist, misogynistic words and comments [on them].’

They choose to support Harbour due to the little amount of funding the charity gets and to raise awareness of the work they do.

On the sinks, the group scribed sexist comments men have said to them in the past, before securing the sinks onto their backs as symbolic crosses they once had to bear.

Emma said: ‘We had them attached really securely. The bungee cords digging in weren’t that bad, once you start walking you don’t really think about it.

‘You’re doing it for a good cause so you know you have to get to the top and back down – you don’t really think about the weight or anything like that.

‘Because we’re wild campers we’re used to carrying heavy backpacks up a mountain so it wasn’t so much the weight [we had to be mindful of].

‘We just had to be careful if it was a windy day that they were attached well enough that the wind wouldn’t use it as a sail.

‘We attached them really safely. We thought about all aspects – different weather, the weather turning, the metal getting hot and making sure it wasn’t actually touching our bodies.

‘We put a lot of thought into how we were going to carry them up.

‘It was a really busy day on the mountain, it was a lovely day.

‘I’ve summited Scafell dozens of times and never seen it that busy at the top before.’

Get in touch by emailing Metro[email protected]