You can now stay in a Queen's Gambit inspired hotel room 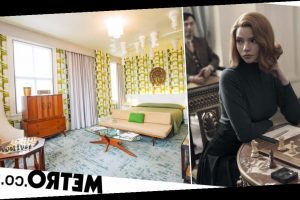 If you loved Netflix’s The Queen’s Gambit as much as we did, you will be happy to know that you can now stay in a hotel room inspired by the show.

The room – launched by boutique hotel and contemporary art museum 21c Museum Hotel Lexington in Kentucky – is a 60s style room with mid-century furniture and decor.

It even has chess pieces installed on the ceiling to mimic the hallucinations experienced by main character Beth Harmon.

Called The Harmon Room, the interior design is similar to that of the many rooms Beth stayed in throughout the series.

To appeal to diehard chess fans, the room includes copies of Chess Review magazine, chess-themed wallpaper and a chess set that you can also purchase.

The Queen’s Gambit was an unexpected Netflix hit and has been watched by more than 62 million people. This extraordinary number makes it the most-watched limited series in the streaming platform’s history.

Based on the novel of the same name by Walter Tevis, it tells the story of an orphaned young chess prodigy (played by Anya Taylor-Joy) who develops an addiction to tranquillisers as she tries to become the best player in the world.

The show was mainly filmed in Kentucky, where the tourism board has also created a Queen’s Gambit Guide identifying filming locations and landmarks for tourists.

Would you stay in The Harmon Room?